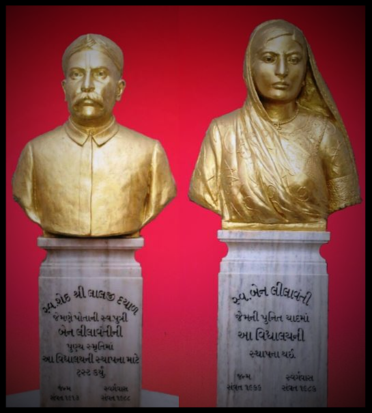 This educational institute was incepted 83 years ago, to carry forward the dreams of  a Visionary and Philanthropist - Sheth Shri Lalji Dayal. The objective of the institution was that every child who wishes to get educated, can do so and no child should remain illiterate in the Gujarati  Community. Today, that dream has continued and the school has achieved it's glory due to the dedication of all who have been associated with it.

Sheth  Shri Lalji Dayal was born in the 1856 in Gujarat, Kutch Mandvi. At a tender age of 11 years, when children of his age were enjoying their childhood, he was introduced in the family business. In his entire lifespan, he achieved success in all his business ventures and they  flourished, due to his foresight and the business acumen that he possessed. He was always interested in investing in ventures that would  pay rich dividends and also serve the society at large. He was particularly interested into acquisition of property. One such property is the property of the school , where in 1924 he bought over an institution (Gandharva Mahavidyalaya).

In the year 1909 he was blessed with a daughter Kabubai (Lilavati). He brought her up with love, affection and imbibed into her the right and the rich culture of the  Bhatia community is proud of even today.  In  1927 Sheth Shri Lalji Dayal got his daughter married in a grandiose manner befitting his name and fame. However that joy was short lived. Smt. Lilavati expired within just two years of getting married 1929. Sheth Shri was heartbroken, as any father would be.  In order to continue his legacy over a period of time and maintain continuity for his philanthropic activities, Sheth Shri formed a trust in  1931 called Seth Lalji Dayal Amalgamated Trust. After relentlessly serving the society, Sheth Shri Lalji Dayal expired in the same year after a prolonged illness in 1931.

In order to keep his memory alive, of the great deeds done by Sheth Shri,   one of the first trustees of the Trust, Sheth Shri Devidas Madhavji Thakershi started the school and renamed the institution Gandharva Mahavidyalaya to “Lilavati (also known as Kabubai) Lalji Dayal Hindu High school” in 1933 to provide education to the masses . The school thus, had its name and the institution today runs under the name of Lilavati Lalji Dayal High School & Jr. College.

The institution over a passage of time has ensured that the thought process  of Sheth Shri is always maintained to provide education to all. Due to the sustained relentless efforts of all the trustees  (past and present), today the institution  can boast of many achievements over years. It is the passion of all people associated with the institution who work selflessly and relentlessly which has resulted in this glorious past.

The institution has always promoted education and ensured that this activity  is affordable with ease. Although the fees for education are nominal, modernization of the infrastructure has not been compromised. The institution today has well equipped computer labs, science lab and a playground for the all round development of the students which is the envy of other institutions around.

The institution is what it is today because of the excellent management skills of all the trustees  who have served and are serving the trust in  an  honorary  capacity. The trust board has always been blessed by the almighty by having well renowned and illustrious personalities  who have dedicated their time, effort & energy in managing the institution.

The institution has always been blessed with dedicated, zealous and loyal office bearers all through. These office bearers have always had foresight to think ahead. Two examples that stand out from many are the contributions made by two luminaries. Ex-principal Lehru who was instrumental in starting the English Medium section in 1983-84. He had the foresight to see that, the knowledge of English was going to be very important in times to come. Today, the English medium has close to 600 students studying from the Pre-primary section to the Xth standard.

Making profit never been the motive of our school. With the principle of  “ Education is not a business” the institution has been blessed with staff / faculty who have selflessly dedicated their life towards education. The results of the institution have always been high, and today the school can boast of over 85% pass percentage  of all its school students in the Xth standard, and a 89% pass percentage in the Jr. College std. XIIth. The students have also brought glory to the institution by excelling in extracurricular activities too, and have won many inter-school and inter-collegiate competitions  in the field of non academic events. Some of the students have also been participants on a national level in sporting events, and have brought glory to the institution. This speaks volume about the dedication and the feeling of “Imparting True Education & Development of a child” which  the teachers have delivered with their sustained efforts.

Over the years this institution  had many students who have attained success. The institution can boast of unparalleled alumni who have passed out from this institution. Efforts are now being made to compile an Alumni of the past students and arrange a grand reunion. Ex-students are requested to send their name, present address and contact details to the school to help us in reaching out to maximum Ex-students.

The Trust - Sheth Lalji Dayal Amalgamated Trust, has carried forward the ideas of service to the society. It is also involved in many other philanthropic activities like providing  Loans Scholarships, Loans for students wishing to pursue education abroad, free education to the needy, Providing medical facilities. The trust maintains its prime property in Nasik (on Gangaghat) where it runs a Dharmashala to help one and all to complete religious activities. The trust also has a residential building which houses many  a tenants at affordable rates.

The Trust  and the office bearers of the school are committed to the advancement and modernization of the institution.

Our  Torch Berar’s who have ensured glorious Years for the Institution….